There are Options! COPD Clinical Trials might help you!

Chronic Obstructive Pulmonary Disease commonly known as COPD is a group of diseases that block our airways, leading to breathing difficulties. It was the third leading cause of death in 2019, with 65 million people suffering from moderate to severe COPD, as of now. Despite the current treatment options, there is an unmet need for the deceleration of COPD progression in the medical realm.

Revive Research Institute is one of the leading centers conducting COPD Clinical Trials. The clinical research studies are directed to provide potential treatment options for people suffering from moderate to severe COPD.

The eligibility criteria to enroll in the COPD Clinical Trials study are as follows:

Men and women who suffer from Chronic Obstructive Pulmonary Disease (COPD) and fulfill the above criteria are eligible to participate in this COPD Research study. 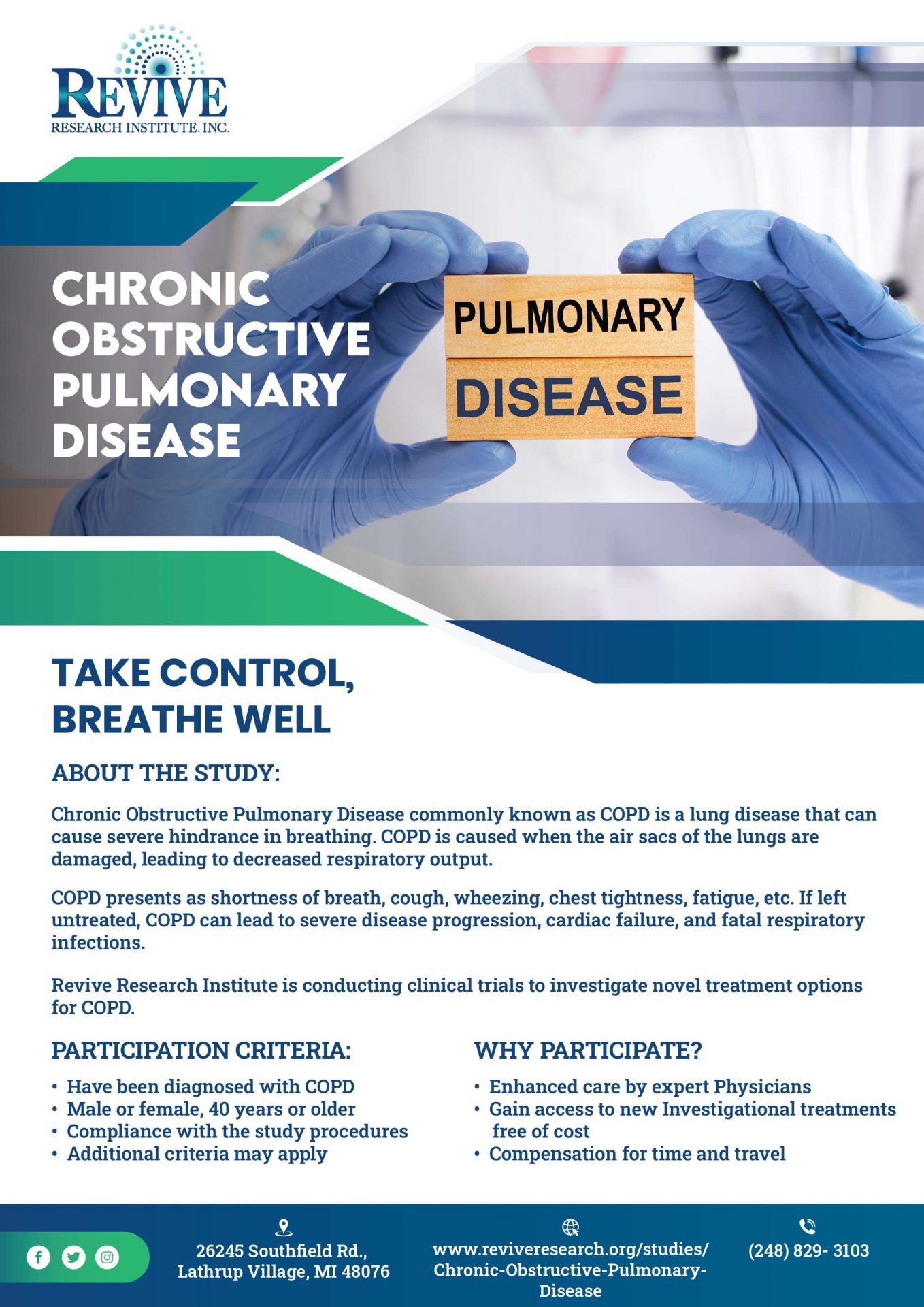 About the COPD Study

Revive Research Institute is conducting multiple Phase 2 and 3 COPD research studies, with the goal of assessing the investigational products’ safety, efficacy, and tolerability in COPD patients. These clinical studies are open to those who are presently getting therapy for smoking or who require additional treatment. The investigational products may be administered intravenously, subcutaneously, or the nasal route.

For the COPD Clinical Trials, we will be enrolling former smokers and non-smokers. The participants will be split into two groups, one receiving the study medication and the other receiving a placebo (a drug that looks like the experimental drug but is medically inactive). The participants in the study and doctors would not be aware of the administered medicine because it is a blinded trial.

The COPD research study is open to non-smokers and former smokers. There will be a few visits at the site as well as certain visits that may be completed on the telephone.

Get Started: What to Expect?

If you are a smoker, a former smoker, or a non-smoker, and are also suffering from Chronic Obstructive Pulmonary Disorder (COPD), then we might provide options for COPD research studies that may be a fit for you as per the study’s eligibility criteria.

You will start by filling out this form, after which one of our representatives will reach out and call you to check if you are fit for this study. Then, you will be called to one of our clinical sites, which is nearest to you for a screening/introductory visit. You will be provided with an informed consent form (ICF) to sign. After signing it, you will be asked a number of questions related to your health and medical history alongside going through some tests. All of this will be to confirm your eligibility for this study.

Once your eligibility is confirmed, you will be informed and formally invited to be a part of this clinical trial. A study drug or a placebo (a substance that looks like the drug but has no active ingredient) may be provided to you either intravenously, subcutaneously or the nasal route (depending on the respective study’s eligibility criteria). Participation in either of the study will be free of cost, and a group of qualified and experienced medical staff will be there to give you study-related care throughout the duration of the research trial.

COPD, or chronic obstructive pulmonary disease, is a group of disorders that cause airflow obstruction and breathing difficulties. Emphysema and chronic bronchitis are major examples of COPD.

COPD symptoms don’t normally develop until there’s been a lot of lung damage, and they often become worse over time, especially if you continue to smoke. COPD can cause the following signs and symptoms:

People with COPD are more likely to have exacerbations, which are occasions where their symptoms worsen than usual and can last for some days.

Continuous tobacco use, asthmatic patients, inhaling dusts, chemicals, and fumes in the environment, and genetic predispositions are all significant risk factors for COPD.

COPD can lead to several difficulties, such as physical restrictions, fatigue, other chronic diseases such as arthritis, congestive heart failure, diabetes, coronary heart disease, stroke, or asthma. The need for special equipment, such as portable oxygen tanks, as well as the risk of lung cancer are all factors in play. Furthermore, coping with a major illness can also trigger depression.

1. Does pipe and cigar smoking also result in COPD?

Pipe and cigar smoking are less frequent causes of COPD since the tobacco content in their smoke is less than that in cigarettes.

Due to their existing lung problems, patients with chronic obstructive pulmonary disease (COPD) are at a higher risk of more severe sickness from COVID-19.

3. Where will the COPD Research Study take place?

Revive Research Institute is currently conducting the COPD study in the Michigan area. If you are interested in being a part of this study, please fill the form above, someone from our research study will give you a call. For those who qualify and are interested in participating in our studies, our research sites are usually at a 50-mile radius near you. All participants are monetarily compensated for their travel.

4. Can smokers participate in the COPD Research study?

5. Do I have to pay to volunteer for the COPD Clinical Trials?

Participation in each of our clinical trials are free of cost. Insurance is not required to participate. All volunteers study-related care and treatment free-of-cost. If you qualify and decide to participate, you will receive compensation for your time and travel.

6. What is the difference between a normal cough and a COPD cough?

A cough caused by COPD is commonly productive, meaning the individual coughs up mucus or phlegm. Many individuals with COPD, however, may encounter a dry cough.